A card game based on the Blizzard/China scandal of 2019, where you fight for free speech and human rights against an oppressive authoritarian regime, and a corporation intent on continued economic growth - at any cost.
HARSHTONE CARDS

HarshTone was conceived and developed by a long-time Blizzard gamer and artist in the immediate aftermath of the China/Blizzard controversy during the lead up to the BlizzCon 2019 protest. It was created as a means of personal protest as well as social and political criticism. The goal is to explore the the political and social struggles of Hong Kong, the human rights abuses being committed by China's authoritarian government, Activision Blizzard's role and power on the geopolitical stage--all in the form of the very thing that birthed this controversy in the first place:  a card game.

The decks aren't just for looks--each is a fully functional, playable card deck, and can be played against any of the other decks in this project. Visit "The Decks" page to download a printable PDF of the deck of your choice. Each deck requires only 4-5 printed pages for a full deck, with an optional card-back design. 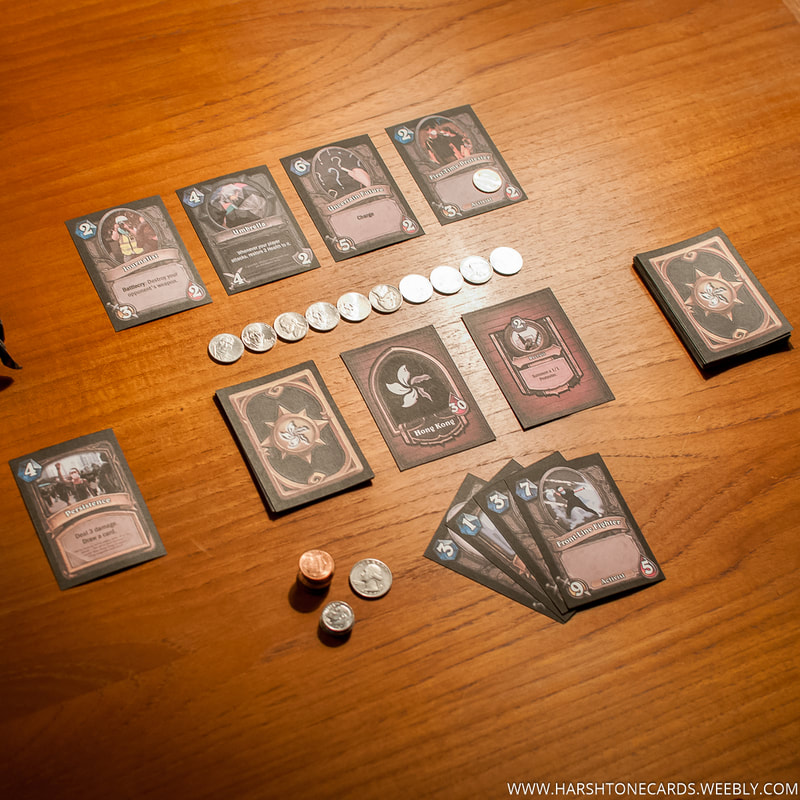 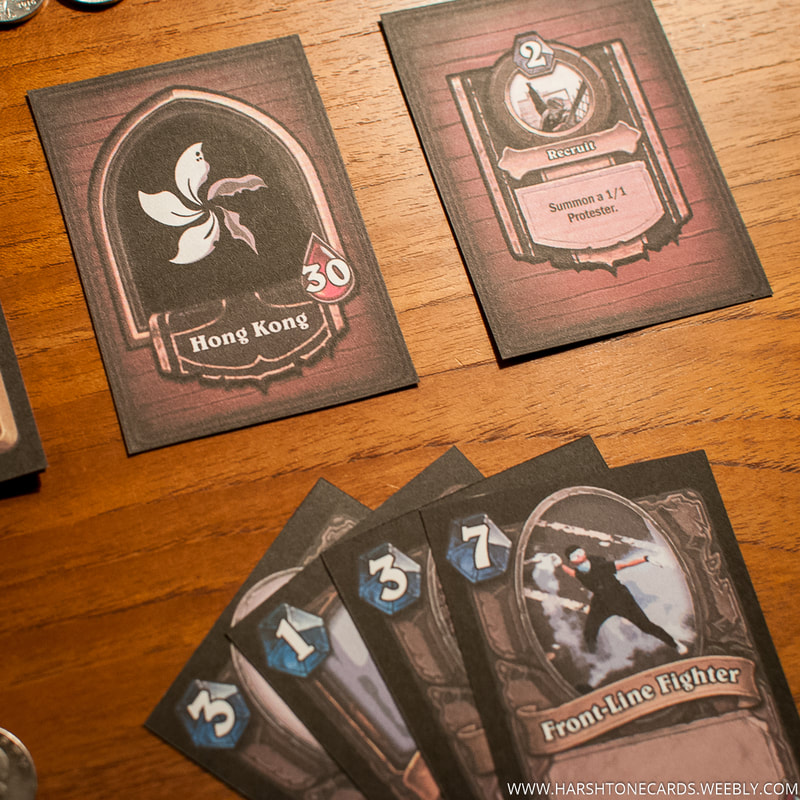 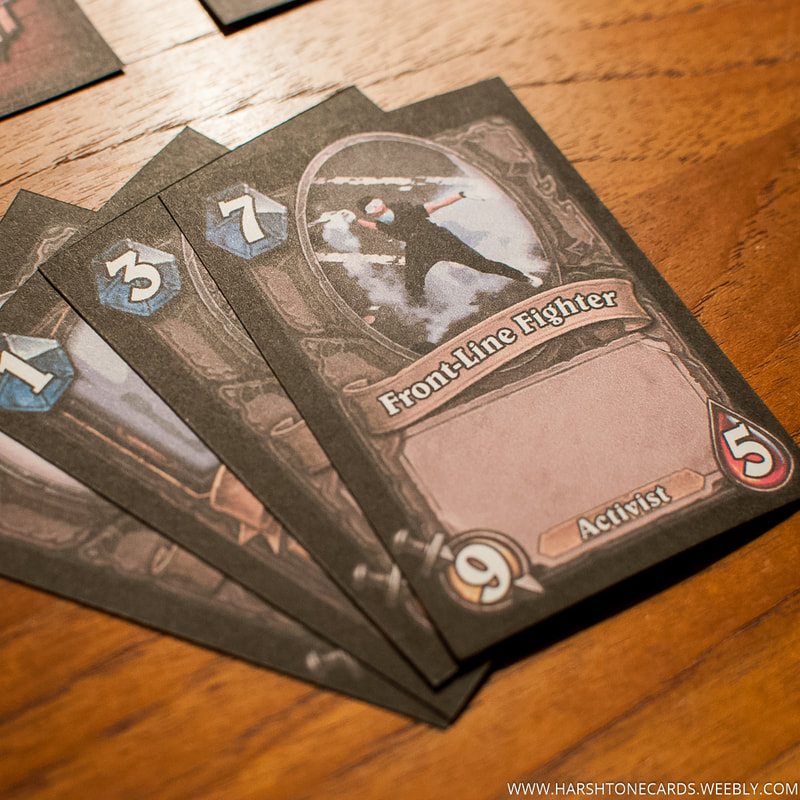 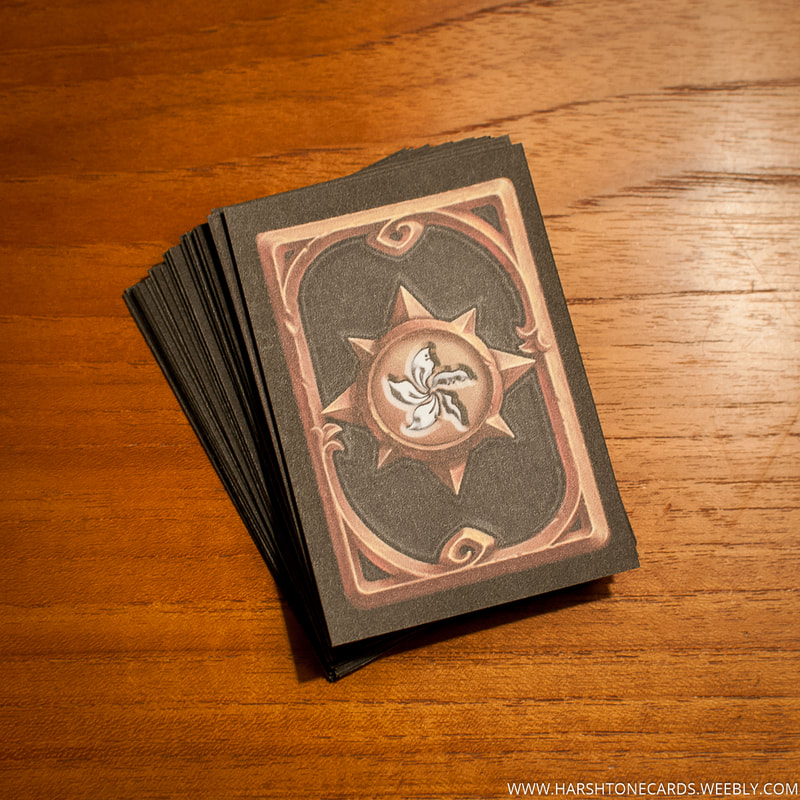 The deck pictured above was printed on 67lb cardstock using a basic home office multi-function printer.

I have played Blizzard games for many, many years. World of Warcraft was my first, and it helped me get through a very difficult time in my young adulthood. It gave me a rich and vibrant world in which I could escape the difficulties I was going through, and it connected me to a host of wonderful people who later became my first guild, and some of my first meaningful online friends.

I was first introduced to Diablo by a close friend during the development of Diablo III. We played the D3 stress test together, sitting side-by-side in my living room as we eagerly worked our way through the Citadel to reach King Leoric, exploring every inch of the map available to us along the way.

Hearthstone was another game which quickly became a favorite. As both a card game and Warcraft fan, it was of immediate interest, and found an immediate place across my devices. Suffice it to say, video games—especially Blizzard games, have been a large and fond part of my life.

When I learned of the company’s actions surrounding Blitzchung, I was deeply upset—and that upset quickly turned to betrayal, then anger, as the company doubled and tripled down on their stance, doing all they could—as quietly as they could, to keep conversation about their actions and the Hong Kong protests to a minimum.

Until this, Blizzard was a company I admired and respected. What flaws I found in their games, in the company, or the manner in which they cultivated their community I was willing to forgive or dismiss in consideration of the quality of their games, the care of their developers, and the meaningful contributions they’ve made to the gaming industry as a whole.

However as this controversy has unfolded, and as Blizzard has made clear over these past weeks that their actions towards Blitzchung and players discontented with the decision are not a poorly-thought and over-hasty reaction, but a firm reflection of their company’s current interests, I now realize that those flaws—those concerns I had dismissed, were in fact canaries in the mine signaling a larger and far more concerning complex of problems at play.

eSports is a lucrative industry with tremendous room for growth, and as a notable member of that industry Blizzard stands to profit from Blitzchung’s competitive performance—yet the company was ready to deprive him of a significant source of income and security for advocating his and his peers’ rights and freedoms in a politically volatile region, even when doing so posed a risk to his own safety. Free speech and expression is not merely an American value, it is an established human right; and Blizzard violated that right with their decision.

Profiting off the work of the disenfranchised—extraction capitalism in eSports of all things, is something I would never have expected to see from Blizzard; but it has happened. As a gamer, an artist, an activist—as a human being, I cannot and will not remain silent on this matter.

I created this series of decks to comment, criticize, inform, and provoke conversation about the incredibly serious issues surrounding Blizzard’s proclaimed a-political decision to punish Blitzchung for speaking out in support of Hong Kong, as well as to examine the nature of and manner in which the various players and political issues comprising this controversy interact and intersect with one another.

I encourage you to share these cards. Post them online, print them and play them with friends. Take a deck or two to a protest, to school or university. Talk about these issues with others, and discuss methods and means of asserting your discontent. Protest, boycott, speak out; every voice matters, as every voice possesses the potential to carry tremendous weight, and affect tremendous change.